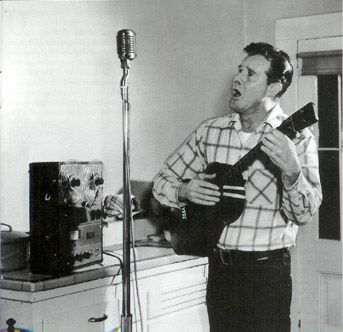 I remember it vividly. It was a sunny Sunday morning, probably 2005 or 2006. I was slowly waking up from the relentless drone of chainsaws, lawn mowers and other powertools that rural Kiwis like to use on the weekends and as usual switched on the radio. The reassuring voice of Chris Laidlaw oozed out of the speaker, in glorious AM (New Zealand National Radio’s FM signal was notoriously unstable in Kakanui) and then suddenly a bloke with what sounded like a weird guitar and a bass drum started, well, not really singing, more rapping.  Sprouting lyrics like this:

A pterodactyl was a flying fool,

just a breeze flapping daddy of the old school,

but a mamadactyl could sure make him drool.

Turns out it wasn’t a guitar, it was a bariton ukulele. And it wasn’t a bass drum, it was apparently his foot tapping the base of his microphone stand. And the chap singing it was Jimmy Drake, aka Nervous Norvus. There is little on this man on the interwebs, apart from two excellent articles by an equally mysterious chap called Phil Milstein who sketches a rather sorrowful biography of the man (see list of references). The saddest anecdote for me was the story of Drake’s first hit, the inspired ‘Transfusion’:

This is how Milstein tells it:

[…] it was big enough that the producers of The Ed Sullivan Show invited Drake to lip-sync to it on the Sunday night variety staple. To most performers, an offer to appear on Sullivan’s “really big shew” was a once-in-a-lifetime golden opportunity. But, according to Blanchard, “he chickened out. He was afraid to go — he wouldn’t appear in public.” Although the hitmaking part of his career was certainly doomed anyway, with that decision Jimmy Drake virtually plunged the fork into it.

After fading away from from the public interest, he continued to put little ads in music magazines, offering to record demos of other people’s songs. One song 10$, two songs 19$. And then he died, aged 56 of liver cirrhosis. Turns out he sought solace in booze just a tad too much.

On that Sunday in Kakanui I pledged to buy a bariton ukulele and play one of Drake’s ditties on the famous open mike night of the even more famous Pinguin Club with the world famous Bookbinder of Oamaru doing the Ape Call yodel. For some weird reason this never happened. It wasn’t that the three chords of ‘Ape Call’ weren’t easy to play (even for an absolute beginner like myself), but stage fright took over every time and so I still dream of one day performing the ‘Bullfrog Hop‘ or ‘The Fang‘.

At least I still play the Ukulele.

In the meantime, I will play my new EP of the original Dot recordings until the needle breaks or the best girlfriend ever throws the record out with the trash. 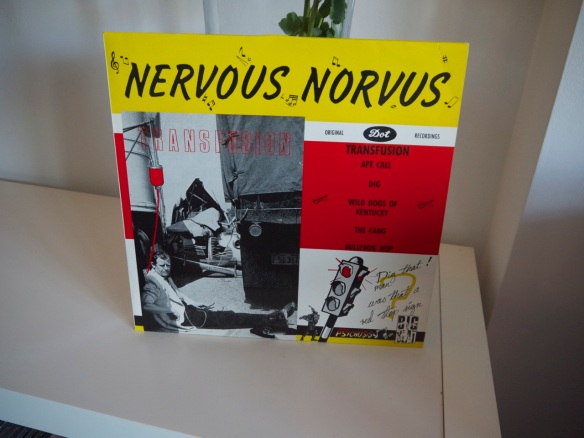 For more excellent reading on the wonderful Nervous Norvous, please check out these two of Phil Milstein’s many excellent articles: