If you have a look at the map of Basildon, that semi urban poster child for 1960’s ‘New Town’ inspirational architecture, you’ll notice that over the years it has spilled over it’s borders (set by large bypass roads) and incorporated its surrounding villages (infecting them with similar architecture). Apparently the oldest of these hamlets is Laindon, now a small sleeper town with the probably most dilapidated ‘shopping centre’ ever. In the north of Laindon is a single hill, overlooking post industrial South East Essex featuring a lovely 14th century church. 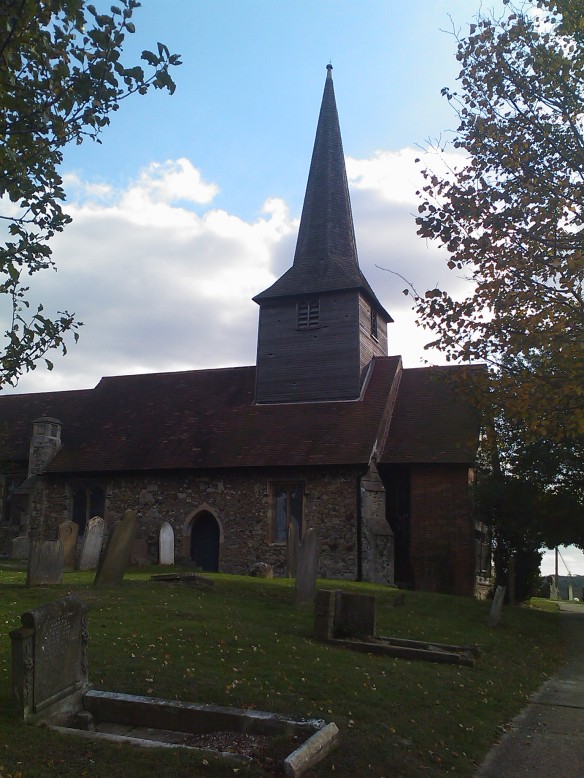 St Nicholas Church and its surrounding cemetery is a lovely spot to soak up the sun and enjoy the surprisingly green surroundings.

The only thing you won’t escape is the constant noise from the surrounding roads. Especially the A127 is relentless with its continuous low frequency hum from thousands of tyres rolling up and down the countryside.  The CHurch is quite well connected. It has it’s own website and even a ‘friends of…’ site (which needs some tlc btw), which, as I am reliably informed, has been set up by the very people who turned the little hill into the lovely spot that it is now by tending the plants, looking after the graves, etc.

Isn’t it comforting to know that even behind the most anonymous of sleeper towns there is still a group of people looking after its heritage?