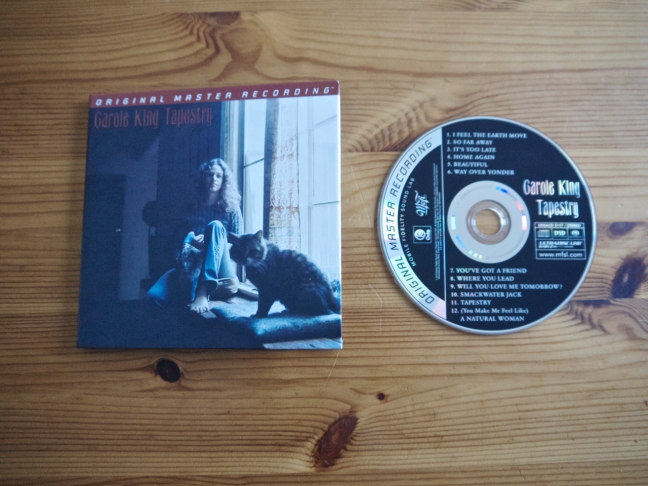 If you’re in your forties, it’s pretty likely that you have been exposed to the songs on this album since you were very small, be it on the radio by Ms King herself or in covers by your favourite bands when you were a spotty teenager. It’s even more likely that your parents had a copy. It’s one of those seminal works of art in contemporary western cultural history comparable to Warhol’s ‘Campbell Soup’ paintings. For me it’s one of the best albums of all time, next to ‘Rumours’, ‘The White Album’, ‘Nevermind’, ‘Pet Sounds’, ‘The Lexicon of Love’ and of course Matt Bianco’s eponymous second album. There is not a single bad track on the album, but of course the outstanding ones are the much covered ‘I feel the Earth move’, ‘So far away’, ‘It’s too late’, and ‘You’ve got a friend’. I’ve only bought the album a few years ago second hand in a charity shop in Oamaru, and had listened from time to time and always enjoyed its seventies appeal and its sonic simpleness but the copy I had was so scratched that soon enough it wasn’t possible to play it anymore. My digital copies were still intact, but boy, it did sound limited.

Since I added a SACD player to the living room’s audio setup, I have slowly but surely bought SACD versions of my favourite records to the collection, so I ordered Mobile Fidelity’s SACD edition to replace the old silverling and, suck me sideways: what suddenly came out of the Klipschs was nothing like the muddled, ancient seventies stuff that I was used to. This was suddenly an intimate, very vivid live performance in my living room, with a piano player in the middle. During ‘So far away’ I suddenly picked up the drummers problems with keeping his hihat and bass drum synchronised (I actually never noticed any drums on that track) and the beautiful flowing basslines of Charlie Larkey. Never before did a SACD make such a difference and raise a thick curtain of acoustic muffling to reveal an amazing production.

‘Tapestry’ is an amazing album that is close to perfect, and with this edition Mobile Fidelity has produced an absolute stunner. Has been running non-stop for hours now.