While observing me losing against a 14 year old in a Squash game, a friend of mine once commented ‘That Fordie doesn’t have a competetive fibre in his body’. That might be correct when it comes to meaningless things like games in which the main goal of the players seems to sustain a ligamental knee- and/or ankle injury as quickly as possible , but when it comes to the performance of my computer, I do start to get a bit twitchy and keep a virtual eye on the performance of the rest of the users out there. Not that there is a iota of common sense behind behaviour like this, but for goodness’ sake, if a man is not allowed to engage in some primal chest beating about the speed of his computer, what else is there left for us Y chromosome carriers. At least I don’t drive a sports car, have a hair piece or play golf. Fortunately the best girl friend ever (BGE) regards the whole thing as some sort of occupational therapy and is probably quite happy to have me locked away in my office for an hour or so, so she can watch Paul O’Grady.

Paul O’Grady and a Dog

I always thought that my office computer had quite a bit of oomph (Sabertooth 990FX 2.0, 16GB Ram, 250 GB SSD, 2x 2 Terabyte HD, R9 290, Asus Sonar Essence for those who really want to know), but it turns out that it’s processor really doesn’t hack it anymore in today’s world of advanced real word graphic simulations. Because I have a smidgen of loyalty and and I am stuck with an AM3 socket motherboard, there was only one alternative: get a quicker processor from AMD Piledriver’s architecture. So I acquired their quickest one.

The FX-9590 is a bit of a beast. It’s power consumption and heat dissipation is legendary and I was worried that I might overwhelm the local electricity provider but all I did was overwhelm my already massive cooler, as benchmarking resulted in my motherboard shutting things down. So, after getting the only air cooler that apparently handles the heat from the 9590 without it destroying the rest of the motherboard, I spent two very meditative hours trying to hitch the bloody thing up to my motherboard without destroying things (trust me, it has happened). 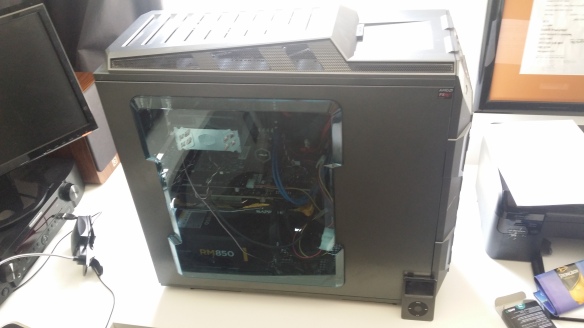 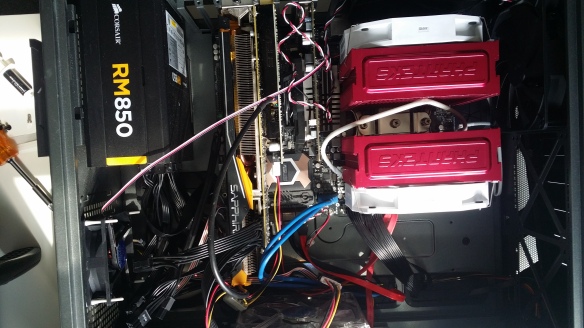 After successful implantation. That pink thing is a Phantek PH-TC14PE. Sorry for the cable disaster.

Ok, so it’s not pretty, but is it working?

Fortunately I can confirm that everything seems to be working spiffingly. CPU temperature at idling (Word, iTunes, Power Point, Firefox and Outlook running parallel) is 32 Celsius, and so far the maximum temperature recorded was during a session of Titanfall at maximum resolution, and at 52 Celsius that was still pretty balmy (especially as the R9 290 gets really hot as well).

So, I still only have a second-rate processor compared to the new generation of Intel’s products, but at least I don’t have to worry heating the house ever again.