Bill Bailey – Britain’s current foremost thinker – recently stated the fact that he shares some of David Cameron’s personal tastes while completely despising him on every other level is giving him a significant headache, before going into a tangent on the cause of this: cognitive dissonance. Fair enough. I have a slightly similar – though less existential – issue every time I arrive in Singapore. This is obviously a place in which its ruling classes have poured a lot of thought into. Not the scatterbrain, skittish (and at times scatological) approach to public services that is the UK’s trademark, with an ancient, non-functioning public transport network, local and national authorities in which documents frequently get lost, letters don’t get answered, billions are squandered on futile IT-projects and the Department of Transport can’t even run a bidding competition for a train line, but the methodological, analytical sort.

Singapore is different that way. From the moment you enter the city state you know that things are being run efficiently: you are being nudged (and sometimes pressured into) doing the right thing: don’t spit on the streets, don’t use chewing gum, don’t eat or drink on public transport, be kind and considerate to your fellow citizens, don’t ruin the environment. Work hard, prosper, send your children to school and make them work even harder. You want to live here? No problem. We don’t care about your sex, skin colour, beliefs or sexuality as long as you work. Did I mention hard? So, obviously the middle aged, non-rebellious, peace and quiet loving  part of my brain approves.

Then there is of course the social engineering, the unfettered capitalism, the state owned press, the almost exclusive autocratic one party rule, the personality cult around the prime ministers, the draconian laws, the death penalty and the abuse of cheap labour from the surrounding poor countries.

So, cognitive dissonance. I really like going there. I really do. I nevertheless always feel just a teeny weeny bit like a collaborator of the government and hope that my friends from Amnesty International won’t look at me accusingly.

Three weeks ago the best girlfriend ever (BGE) made me follow her to see two of the Singapore Biennale’s exhibitions at the National Museum of Singapore and the Singapore Art Museum. Under the title ‘If the world changed’ regional artists were given the chance to “to respond to and reconsider the worlds we live in, and the worlds we want to live in.” With the BGE much more learned when it comes to art and such things I was happy to potter along, as I would get a rolling commentary and get to do some gadget shopping afterwards.

We started with the National Museum of Singapore (NMS), where objects of the biennale were haphazardly strewn around the place, making the place a bit more messier than Lee Kuan Yew might have liked it, but it certainly added some welcome charm to the other rather sterile confinements of the NMS. Here’s an example: 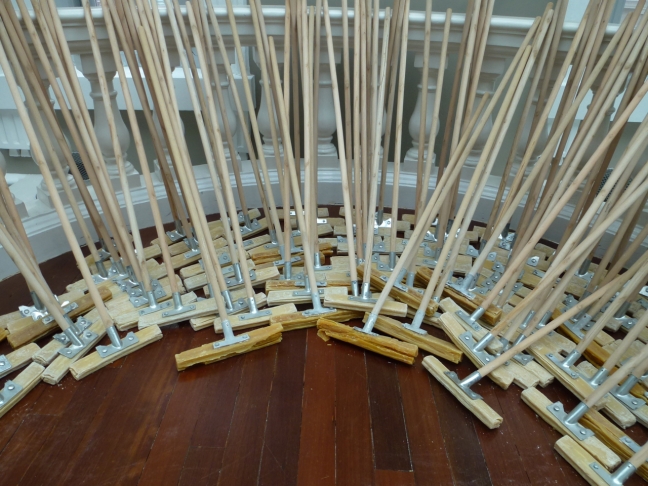 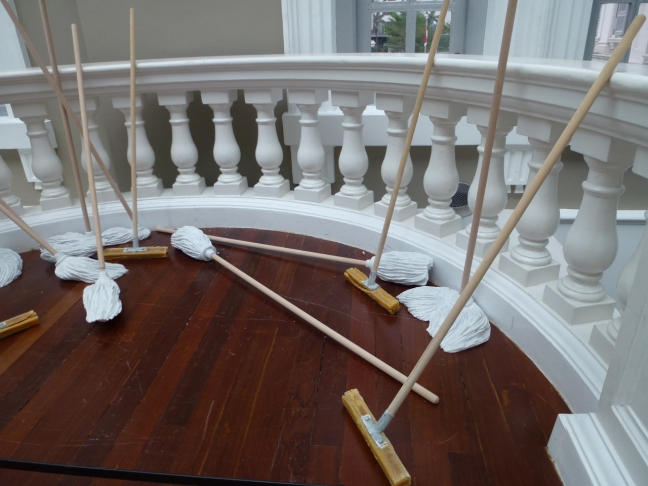 This is called ‘Chalk and Cheese’ by Leroy Sofyan. Unfortunately I wasn’t able to interpret what the artist was trying to tell me about the future, but the BGE tells me it has something to do with cleanliness. Right.

My personal highlight was though the ‘living gallery’ on Singapore’s food history. Amazing smells, great exhibits, brillant noises. How museums should be.

So, the cognitive dissonance will go on. Turns out I am just an unprincipled pseudo liberal with a penchant for autocrats.

I better make sure my Amnesty International subscription is up to date. Alternatively, please donate for my sake.

Let me make myself absolutely clear:

What kind of political culture do we have in the U.K. if it’s elected representatives only have a vocabulary limited to 6 catchphrases? The most used ones are surely:

Funnily enough, Gordon Brown’s speeches (as evident on his homepage) are actually quite good. It’s just a shame that he is not able to convert his speechwriter’s obvious talent into his radio nterviews.

And by the way: since when has it been ok to say “We have got to..”? The ‘got’ in there is certainly perfectly superfluus and just a little bit reminiscent of American action movies.