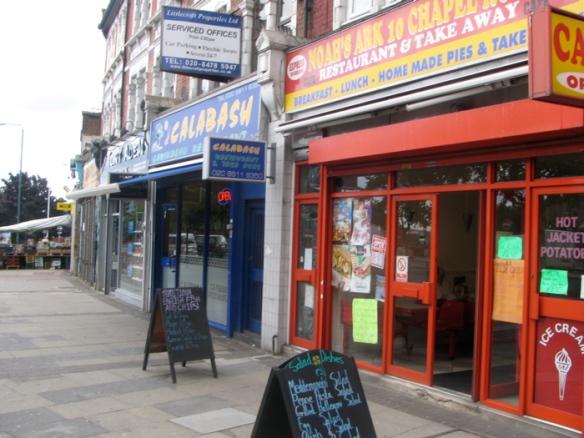 Now, I would never, ever try to compete with Russel Davies’s Eggbaconchipsandbeans, but for once in my life I wanted to at least try to emulate the amazing experiences he must have when he sneaks into a new cafe, camera at the ready, poised to picture another perfect plate of food. So, when I had a morning to spend in Ilford (the less exciting East of London’s East End) I found this little gem of a cafe and, wielding my trusty TX1, entered the premises and uttered for the first time the eternal words:

Can I have Eggsbaconchipsandbeans please?

And it worked. After 5 minutes (in which I wanted to write numerous letters to the Daily Mail, as this was the only paper that was lying around) this arrived in front of me (with two enormous slices of fresh buttered bread and a smile)

Now this looks as good as most of Russel’s cafes. The cup of coffee was lovely and fresh, the smiles genuine and the price fair. The beans were desperately clinging to the edge of the plate, not to be pushed into the abyss by the generosity of the cook. The chips were lovely and not too dark, while the bacon made an almost teutonic statement of hegemonical prowess draped over a a third of the porcellain, and only the egg retained a modicum of modesty.

They had more lovely stuff on their menu:

I am now a part of the gobal brotherhood. I will worship in the altar of the greasy spoon as often as my ever expanding waistband will allow me. But I will defintely return to this, my first place of epiphany.