Merry Christmas, Happy Hanukah, Wonderful Id and a great Divali. And for the Atheists out there, have a lovely couple of days off (unless you’re a policeman/nurse/doctor/fireman/prostitute/priest/sysadmin/dj/environmental engineer/prime minister or any other profession that’s needed during the holidays).

The best girlfriend ever found an EEEPC under the christmas tree yesterday evening (well, to be correct, it was hidden in her handbag because that’s where it’s going to live). Until two weeks ago I had no clue what to give that precious woman, until, while surveying the current laptops on offer, she declared “they’re all far too chunky. I want something that fits in my handbag and that is easily taken to meetings where it obstructs the deskspace”. She was already using a G4 Ibook, knew about the existence of my own MacBook (that was still too large) and frowned upon Blackberries, TabletPCs and those terrible Windows Mobile devices. Sensible woman, she is.

So the only option was the OLPC really. But then it looked rather childish, had garish colours and would not make a appropriate item in the boardroom. The EEEPC, on the other hand, had traditional laptop looks, was white, just as affordable and featured everything a female geek by osmosis could want. So the EEEPC it was.

When the little box was delivered to my workplace, the response was impressive: I was immediately surrounded by a gaggle of nurses (or is it a flock of nurses?) who wanted to touch it, take it home with them and there was definetely swooning going on. Even one of my rather ungeekish male colleagues wanted to touch it, open it and made positive grunting noises about its size, keyboard and weight. So, the first test was passed with flying colours. Then the big moment: the discovery of the item on Christmas eve (which is when we get our presents, like proper people). When the best girlfriend ever opened her handbag to look for something unrelated, the Eee (which is how I’m going to abbreviate it) was found in the handbag’s depths with the comment: ‘that’s not mine!’. Then slow dawning of realization happened and enthusiastic noises were made, even euphoric yelps were heard. Later, after an enormous dinner and generous helpings of red wine I actually got my freshly washed fingers on it as well and was immediately taken aback by it: for a bloke of my hand size, the keyboard is certainly a bit on the small size, and the 800×480 screen would probably annoy me after more than thirty minutes.

But that’s were the difference lies: the best girlfriend ever is unlikely to use it for more than short bursts (not everybody spends half their waking time online) of online activity, and it certainly seems to be perfect to browse the net, email, write and listen to music. One 2 GB SD card will hold all the music and data that she will ever need outside work, and for movies these can be replaced easily be her in-house geek.

Here’s a picture of her reading E2: 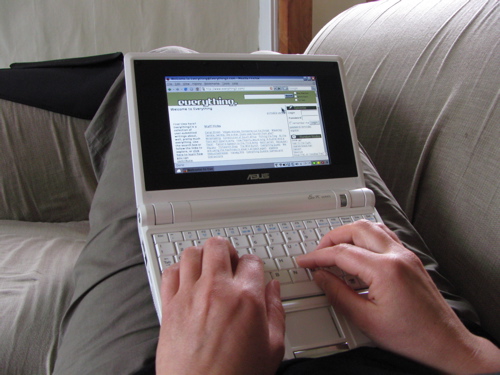 A complete and utter success.

1 thought on “An EEEPC under the Christmas Tree (look what I did there!).”