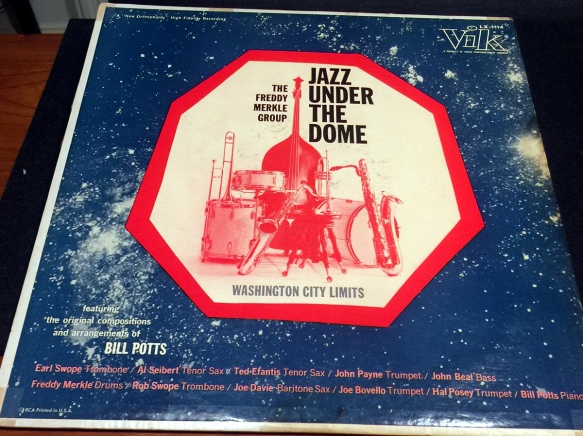 It often astonishes me how much good music is out there, lying around in charity shops, often for sale for a pittance. I often wondered what it must feel like as an artist to find the product of  years of hard graft in a bargain bin in a charity shop, for sale for 50 pence. Probably a bit dejected, I would assume.  A few weeks ago I purchased about 20 or so Jazz records from a charity shop (paying a few bob more than was expected of me) and took them home for sorting. The vast majority turned out to be the usual dixie albums by various pop and mum’s cousin from down the road bands that somehow scraped enough money together to make a record, but a few where genuine discoveries. One of them is the impressive ‘Jazz Under The Dome‘ by the Freddy Merkle group. Stylistically to be found around Miles Davis’s ‘Birth of the Cool’ (though harmonically a bit more conservative), this is a collection of songs composed, arranged, conducted (from the piano, which he plays on the sessions) by one Bill Potts. An excellent feature on Bill Potts by Eddie Dean in the Washington City Paper gave me a bit of background and led me to discover a whole range of amazing jazz from the late fifties: Lester Young’s sessions with Pott’s trio in some dingy nightclub in D.C. Potts recorded with his own gear, and ‘The Jazz Soul of Porgy and Bess‘, a commission from United Artists. The guy had some serious jazz chops, and as I’ve been listening to his music for the last 4 hours I can thoroughly recommend his oeuvre.

That’s where the true fun lies when taking old second hand vinyl home: one album will open up a narnia of cool new stories, biographies and much more music. So for tonight the house is swinging to the tunes of Bill Potts and his various co-conspirators.  And thanks to the much maligned Spotify I didn’t even have to go through baskets of second hand vinyl to find them.