I have been on the market for a new mobile phone for some time. I have been scouring the net for advice, read reviews, and ended up wanting a Nokia E71. Unfortunately this little machine wasn’t available for individual accounts at Vodavone here in the UK.  So, I had to think again. A Motorola phone was out the question after my V3x flaked out on me too often (mainly hardware problems with the USB port).  An Apple Iphone was an interesting choice, but too many of my fellow train travellers already had one and were obviously always struggling with emailing using the touch screen. On top of that I already own a Ipod touch AND resolved to get out of my “Apple only” policy that kept me locked in for too long in Steve’s steely embrace. With my reliance on Apple products gone, I was free to pick and choose anything that would work (i.e. synchronize) across the operating systems and machines I own (Ubuntu/OpenBSD/Windows/Ipod(s)).

With the E71, Motorola and the Iphone out of the question, there was really only Sony, LG, Samsung, HTC and the Android left. The Android – while geeky – is just plain ugly and rather enormous. As I wanted a ‘proper’ external keyboard (I never really achieved proper texting speeds on a numeric keypad), only some of the more exotic HTCs and the Xperia were left. I had a Sony before and was always impressed by its solid build, so the Xperia it had to be (yes, I know, built by HTC, but there you go) .]

Image courtesy of Paul at Modaco.com

First impressions: it’s much smaller than the ads make you believe. It’s also pretty good looking. The slide out mechanism of the keyboard is easy to use with only one hand and the keyboard is ok even with my enormous sausage fingers. I was a bit apprehensive about using Windows Mobile 6.1, but so far it seems to be doing ok. It is responsive, the email client Opera Webbrowser works well, and the panels are just gorgeous. The connectivity options are mindboggling:  GSM, UMTS, HSDPA, Wifi, Bluetooth, Carrier Pigeon (with an extra carrier bag). This baby does everything. The Camera is pretty spiffing and easy to use: just hold the phone horizontally between your hands and off you go. Autofocus works well.  Here’s a little pic I shot in Inverary: 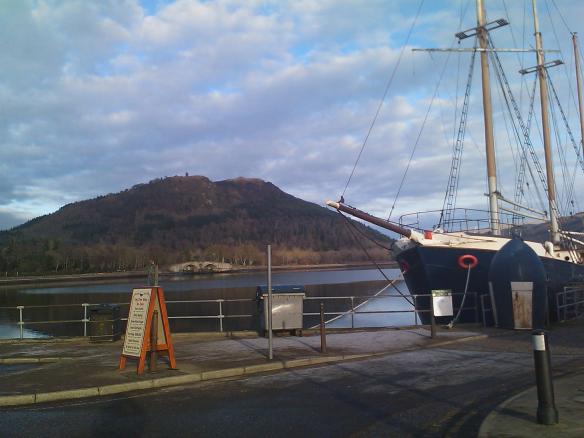 Now that’s not bad for a phone camera. Not bad at all. It’s quite intuitive to use as well. There are plenty of apps out there for Windows Mobile, and thanks to DVD-Rip  and my built in 4GB MicroSD card I have 3 movies on there at any time. It also has an FM Radio.

Am I happy with it?

Yes. It has given me as much functionality as I need with some cool software, has not locked me into Apple and  plays my movies, my music, manages my contacts, does my email and even can take my phonecalls.

What else do I need?